Andrew Withers long standing leader of the LPUK has resigned less than 24 hours before polls open for the General Election. To give credit where it is due, this is a sensible and inevitable step for Mr Withers and fantastic news for the liberty movement. With Mr Wither’s stepping aside there is room for the movement to grow into the political space in one of the world’s leading nations. 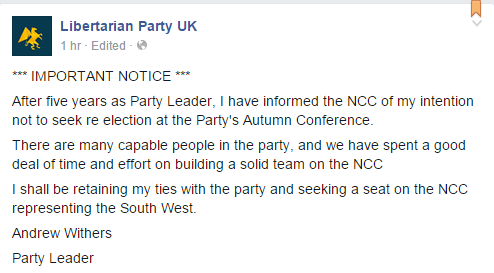 While effective in the Autumn, the exit of the controversial and unsupportable leader should aid the party at the polls, however, it is not known if the party has stood candidates.

As someone close to those controversies I do not expect to see any historical issues resolved, but it would reflect well on the party if an effort was now made to do so.